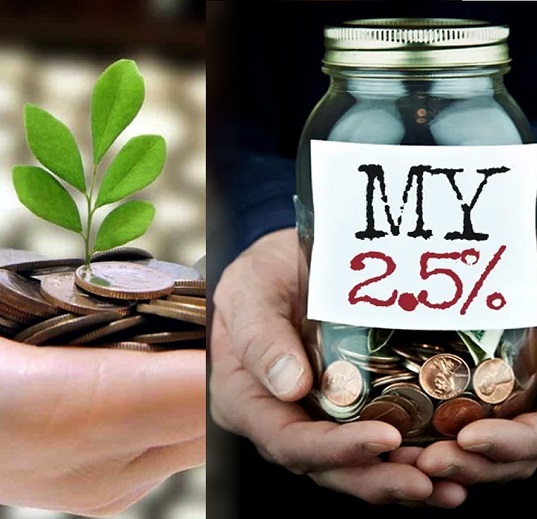 The word Zakat means "which purifies". It is considered to be second important after Salat thus is the third pilar of Islam. Zakat is a method of giving alms to the poor stratum of society according to some rules and guidelines that are described in Islamic teachings. As Zakat is a part of five Pilars of Islam, Zakat is an act of worship and it is mandatory for every Muslim who met the specific criteria, pay Zakat from his wealth (Zakat al Maal). This method is told by Allah Almighty and thus the best way to help the needy and the poor people in your society. Zakat can be contributed as a tax. In the History of Islam especially in Ridda wars, payments and dispute on Zakat had also played a major role. In the book of Allah, Holy Quran, Zakat is highlighted almost 82 times along with Salat. This shows this importance of Zakat that Allah said about it again and again.

Establish regular prayer and give Zakat; and obey Allah and His messenger. Quran (33:33)

Who should give Zakat?

An Adult Muslim having savings of specific amount must pay 2.5 percent of his savings as Zakat. If you have money, gold, silver, stocks or shares and these are equal to the value of 85 grams of gold or 595 grams of Silver according to current market rates than it is compulsory for you to pay Zakat. This is called Nisab.

Principles that should be followed while giving Zakat

It is necessary to declare your clear intensions of paying Zakat to Allah and you must be paying it as a worship, just for Allah.

You should pay Zakat at the day which is due.

After giving Zakat, you must not exaggerate on spending your money more than your needs. Your wealth is Amanah of Allah and you must spend it wisely.

You should pay Zakat to the actual receipt that are truly worthy of it.

When should you give Zakat?

There's no special month or time told in Islam to pay Zakat but most of the Muslims chooses Ramadan to pay Zakat because of it's spiritual value and increase in the blessings during this month. However, If you have a certain amount of wealth according to Nisab, then after a full lunar year, your Zakat is due at the last day of twelfth lunar month. It is obligatory for a Muslim to pay Zakat once in a year.

Zakat Al Fitr which is also known as Fitrana is given by the Muslims in the form of food and money to the poor people in the society before the prayer of Eid ul Fitr. This can be given in Ramadan. The head of the house can pay for his or her dependents such as children, servents or any other relative. The main purpose of this Zakat is that poor people of society could also be able to enjoy Eid.

Allah Almighty in Quran specifies the people to which Zakat should be given, but also gives flexibility to the Muslims. Allah said in Quran,

Indeed, [prescribed] charitable offerings are only [to be given] to the poor and the indigent, and to those who work on [administering] it, and to those whose hearts are to be reconciled, and to [free] those in bondage, and to the debt-ridden, and for the cause of God, and to the wayfarer. [This is] an obligation from God. And God is all-knowing, all-wise. - Al-Tawbah, 9:60

Zakat should be given to the poor people of society that have low income or not much wealth for their basic life requirements.

Needy people of the society means those who are in need of help, those facing difficulties so Zakat can be given to them for their help.

People those are working for some institution that take Zakat from people and distribute it among the worthy ones. So the part of Zakat can be used to give them salaries as they are working for such beautiful cause.

Zakat should be given to the people whose hearts are to be reconciled, meaning New Muslims.

Zakat can also be used to free the slaves and captives, those who are Muslims.

People who had taken a lot of debt for their basic requirements and now they are unable to pay the debt. So Zakat can be used to pay their debts.

In the cause of Allah

Zakat can also be paid in the cause of Allah.

This means the people who are traveling with a few resources and are stranded. Zakat can be used to help them.

Quran also allows the Muslims to pay Zakat to trusted institutions that distributes the Zakat money to those people who belong to be worthy of one or more Zakat worthy categories.

What are the benefits of Zakat?

There are numerous benefits of Zakat. It purifies your wealth as described in Quran,

Zakat also keep us away from evil acts and also saves us from the arising ill from the love of wealth. Zakat also spread love in the society as the love of poor people is increased for the prosperous. Through Zakat, Widows and Orphans, the poor and the needy people of society are cared. Being the third Pilar of Islam, it is necessary for every Muslim who fell on the criteria to pay Zakat must pay it as it has immense benefits. Zakat has the power and ability to change the world but it only begins with you paying it.