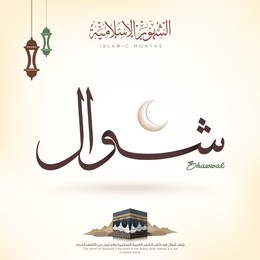 Shawwal is the tenth month of Islamic calendar and it comes after the Holy month Ramadan. Shawwal is derived from the word Shala which means to lift or carry, specifically to take one thing from one place to another. It is so called because generally female camel gets pregnant during this month.

It is recommended to fast six days during Shawwal except the first day of Shawwal which is Eid ul Fitr (fasting is prohibited during this day of celebration). Fasting six days of Shawwal along with the whole month of Ramadan are equal to fasting all round the year. Our Holy Prophet Muhammad (PBUH) said,

“Whoever fasts the month of Ramadan and then follows it with six days of fasting in the month of Shawwal, it will be as if he had fasted the year through.” (Sahih Muslim, 1163)

After the Holy month of Ramadan, Muslims all over the world celebrate Eid Ul Fitr as a commemoration of the month long fast in Ramadan. Eid ul fitr means “the festival of breaking the fast”. During the spiritual month of Ramadan, Muslims all over the world observe a fast between the sunrise and sunset and offer a lot of prayers. They showed self control and devotion to Allah Almighty. After the full month of sacrifice, Eid ul Fitr is the time to celebrate with families and enjoy all the blessings of Allah.

On 7th of Shawwal, a battle happened between Meccans and Muslims within the valley north of mount Uhud. The Qurayshi Meccans, led by Abu Sufyan ibn Harb, commanded a military of three thousand men toward Muhammad's stronghold in Medina. After the death of Amr ibn Hishām in Battle of Badr, Abu Sufyan become the cheif of Meccan's Army. Although outnumbered, the Muslims gained the first initiative and made the Meccan lines back, thus leaving much of the Meccan camp unprotected.

When the battle looked to be only one step away from a decisive Muslim victory, a big mistake was committed by an area of the Muslim army, which altered the result of the battle. A group of Muslims archers who were assigned to their posts by Hazrat Muhmmad left and start despoiling the camps of Meccans. Meecans war veteran Khalid Bin Waleed took advantage of this and attacked them. Muslims faced a lot of damage through it and this became the main reason of their setback. Hazrat Muhmmad also get injured along with many Muslims. Muslims withdrawed from the battle.

A group of roughly 1,000 Muslim men began northward from Madinah toward Mount Uhud. Early subsequent morning, they took an edge on the lower slopes of Capitol Hill of Uhud. Shortly before the battle commenced, 'Abdallah ibn Ubayy, chief of the Khazraj, in conjunction with 300 other men, withdrew their support for Muhammad and returned to Medina, with reports suggesting Ibn Ubayy's discontent with the plan to debouch from Medina to satisfy the Meccans. Ibn Ubayy and his followers would later receive censure within the Qur'an for this act.

"Come, fight within the way of Allah, or (at least) drive (the foe from your city)."

"Had we known the way to fight, we should always certainly have followed you."

They were that day nearer to Disbelief than to Faith, saying with their mouths what was not in their hearts but Allah hath full knowledge of all they conceal. (They are) those that say, of their brethren slain, while they themselves sit (at ease):

"If only that they had listened to us they might not are slain." Say: "Avert death from your own selves, if ye speak the reality ."

Other incidents that happened in Shawwal

On 13th of Shawwal Hazrat Imam Bukhari was born.

Shawwal is a blessed Islamic month and as discussed earlier, observance of fast in six days of Shawwal is rewarded equal to two months of fast. So we must keep fast during the six days of this month so that we can achieve heaps of benefits from this month of Allah Almighty.