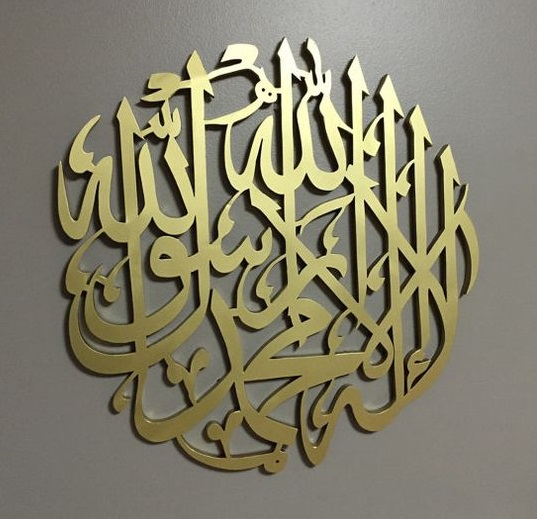 Shahada : The two parts of Shahada

Shahada is the first pilar of Islam and is also the announcement of faith in Allah Almighty and his Prophet Muhammad (peace be upon him). If we go for the exact meaning of the word Shahada, it means "to observe, witness, testify" which is translated as testimony, we can say in both everyday and legal senses. It is the first requirement of being a Muslim. In order to become a Muslim, a person must recite Shahada in which he declares that there is no God except Allah and Hazrat Muhammad (PBUH) is the Prophet of Allah Almighty. It should be recited loud, in correct pronunciation, in the presence of witnesses and with a full understanding of the meaning. Every Muslim must recite Shahada atleast once in lifetime.

"There is no true God (diety) but Allah (SWT); Muhammad is the Messenger of Allah (SWT)"

There are two main parts of Shahada,

Allah (SWT) is the one true God

The first part of Shahada defines that there's no true God but Allah. This means that Allah is the only God, the only creator of this universe. He's the one who created us, give us life, provide us food and everything that is required for our life. It is the basic requirement of being a Muslim that he must believe in the oneness of Allah that there's no partner of him, neither he has a father, mother or a son or daughter. He's the only one who is worthy of being worshipped. In Quran Allah said,

Say: He is Allah, the One! Allah, the eternally Besought of all! He begetteth not nor was begotten.And there is none comparable unto Him.

Allah also said about the creation of this universe in his Holy Book Quran,

He is the Originator of the heavens and the earth. How can He have children when He has no wife? He created all things and He is the All-Knower of everything. Such is Allah, your Lord! Laa ilaaha illa Huwa (none has the right to be worshipped but He), the Creator of all things. So worship Him (Alone), and He is the Wakeel (Trustee, Disposer of affairs or Guardian) over all things” (Surah Anam:101-102)

Hazrat Muhmmad (PBUH) is the Prophet of Allah

The next part of Shahada is to attest the true fact that Hazrat Muhmmad is the Messenger of Allah Almighty and he was sent to convey the divine message of Allah Almighty among his people. Allah choses him to spread his religion among all the Mankind regardless of any region and tribe. After reciting Shahada with all the conditions, it's our duty to follow the teachings of Hazrat Muhammad (PBUH), To believe in all the commands given by him, To love him more than our families, To keep us far from whatever he told us not to do. We must understand his Sunnah and practice it in our life. Allah said in Quran,

Say (O Muhammad to mankind): ‘If you love Allah, then follow me, Allah will love you and forgive you your sins. And Allah is Oft-Forgiving, Most Merciful” (Surah Aal i Imran: 31)

What are the conditions necessary for Shahada?

There are several conditions that are essential for reciting Shahada, to become a complete Muslim and for entering in religion Islam.

We must have strong belief that this is the righteous religion. We must not have any doubts about Islam.

We must have all the knowledge about Islam and full understanding of Shahada.

What are we declaring by reciting Shahada, we must be sincere to it.

We must have love and devotion to Shadah and must be saying it happily and heartily.

We must accept it by heart.

Submission to all the requirements of it, duties that should be performed with sincerity and devotion to the one true God Allah Almighty.

Shirk is considered to be a sin that can never be forgiven. It is an act of worshipping someone in place of Allah or simply neglecting the oneness of Allah Almighty. It is the direct opposition of Shahada in which it is clearly said that Allah is the only God. He's the only one who's worthy of being worshipped. So if a person worship someone other than Allah, he is doing Shirk and it is unforgivable. Allah said in Quran,

Allah forgives not that partners should be set up with Him; but He forgives anything else, to whom He pleases; to set up partners with Allah is to devise a sin most heinous indeed.” [Al-Qur’an 4:48]

There is another form of Shirk that is told by Allah in Surat Tauba that some people consider the scholars of religion, monks and divine religious lawyers as Lords or Gods as they follow their teachings when it varies from the doctrines of Allah Almighty. This is also Shirk.