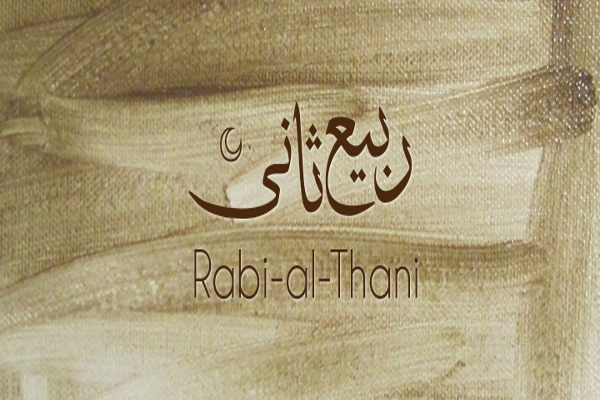 Rabi ul Thani is the Fourth month of Hijri calendar and it comes after Rabi ul Awal. This month is also known as Rabi ul Akhir. If we go for the exact meaning of this word than it means the second month of spring (the first one is Rabi ul Awal).

Many souls of well known personalities left for the final destination during this month and in the rememberance of them, heaps of donations are performed. Allah highlights the significance of donations in his book Quran,

"Those who spend of their goods by night and by day in charity, in secret or in public, have their reward with their Lord: on them shall be no fear, nor shall they grieve" (2:274).

There are many minor incidents occurred in this month but a few major incidents are recounted here,

In Islam, after the Holy Prophets there are many saint personalities (Auliyae Karam) who played a significant role in spreading the teachings of Islam. The most popular reference work in this regard is Tazkiratul Auliya by Shaikh Fariduddin Attar, which is written more than 800 years ago and providing the awareness about the remarkable character of about 95 auliya. Shaikh Abdul Qadir Jilani was one of them.He was born in 470 AH in Baghdad, and he died in 561 AH on 11th Rabi ul Thani. His tribal name was Abu Muhammad and Mohiuddin and Ghause Azam was his title. He was also a decendent of Hazrat Hussain Ibn Ali from his father's side. He also belonged to the religious noteworthy of Jilan and Baghdad. In Quran the Allah Almighty has said:

“For His Benevolence He specially chooses whom He pleases. For Allah is the Lord of bounties unlimited.” (11:73)

He wrote a lot of books but i will name one which is Ghaniatul Taebeen. It's a treasure of knowledge. This book is a precise and accurate explanation of the Holy Quran and through this, you can understand the true meaning of Quran. Many Muslims recite the Holy Quran just to get rewarded but you must dive into the true meaning of it, what Allah wants from us. In order to recognize the divine message, we should read the book of Abdul Qadir Jilani (Ghaniatul Taebeen) so that we will be able to acknowledge everything Allah narrated in Quran. Habib Abu Bakr Al Haddad also died on the 15th Rabi ul Thani.Ahmad sirhindi also passed away on the 27th of Rabi ul Thani.

A war happened in Rabi ul Thani named Battle of Surriyah. Our Prophet Muhammad (PBUH) didn't take part in this war but he assigned Ali ibn Abu Talib(his close companion) as the commander of the conflict behalf of him.

Another incident happend in this month is the battle named Furu at Buhraan in 3 A.H . The Prophet was informed that a massive number of Banu Sulaym's tribe members were planning a deception in Buhran. Prophet then elected Ibn Umm Maktum as his deputy of Medina and went for Buhran with almost three hundred brave soldiers. Although Banu Sulaym dispersed and Prophet Muhammad (s) returned to Madina without any war.

3 Things you should do in Rabi ul Thani

Here are the three things that will be very much beneficial for you in this blessed month.

Reading Quran, especially in this month is a good deed so we should read it as much as we can. If we read a letter of Holy Quran we will be rewarded and that reward will be multiplied by ten, I am not saying that Alif, Laam, Meem is collectively a letter, rather I am saying that Alif is a letter, Laam is also a letter and Meem is another letter so if one letter is equal to ten good deeds than just imagine how many good deeds you will get by reading the Book of Allah. Those who don’t know how to read Quran , should learn it and start reciting and those who know how to read it just recite as much as you can in order to gain rewards excessively.

Continuously recite Astaghfar which means depreciation is reckoned as the second crucial step in this month. Do Astaghfar for all your wrong doings in this month so that you may remove all of them just in a single action. You may recite Dua's of Astaghfar,

"O Allah, we have done wrong to ourselves. If you don’t forgive us and have mercy on us, we’ll be amongst the losers"

"Allah, forgive us and have mercy on us. You are our Protector and the best of forgivers. Prescribe for us good things in this world and the next".

Third things that will also be very significant for you is offering Nawafil. Make a habit of observing Nawafil in this month will reward you much.

The blessings of this month (Rabi ul Thani) are uncountable. We can have acceptance of our Dua's from Allah Almighty especially in this month. So if you want to have all the benefits and welfare of this Islamic month, you should atleast do the above mentioned things for the sake of Allah Almighty and live your lives in accordance to the teachings of our Holy Prophet (PBUH).