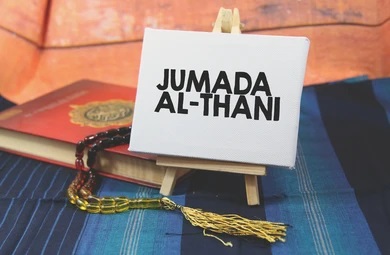 This month is also known as Jammad ul Akhir and it is the sixth month of Islamic calendar. The word Jumada signifies dry and reconstructed land, the land that lacks rain. Therefore, this month denotes the dry time of the year. Actually the Islamic months are mostly named on the condition of the climate so as this month is occurring in the dry weather, it is given the name Jammad.

In this blessed Islamic month, our Holy Prophet Hazrat Muhmmad (PBUH) reached age 40 and was told by Allah through Hazrat Gabriel that he's a Prophet of Allah Almighty and he is here to spread the divine message of Allah among his people.

The incident happend in the way that one day he was is the cave of Hira and was busy in meditation. Surprisingly, the angle of Allah Almighty Gabriel appeared and told him to recite. He than asked him what to recite? Than Gabriel told him to recite,

Read in the name of thy Lord, who created man from a clot of congealed blood. Read and thy Lord is Most Merciful, He who taught man the use of pen, taught man what he knew not” (Bukhari 4953).

Many incidents occurred in this Islamic month including the birth and death of well known personalities. A few details of these incidents are provided here,

Haroon Al Rashid was the fifth Abbasid Caliph. He established a library Bayt al-Hikma which is also know as the House of Wisdom. During his Era, Baghdad had become the center of knowledge, culture and trade in the world. In his empire, the family of Barmakids, that played a significant role in developing the Abbasid Caliphate, declined steadily. He died because of illness. A major revolt led by Rafi ibn al-Layth was began in Samarqand which inforced Harun al-Rashid to shift in Khorasan. He first removed Ali ibn Esa but the revolt continued and due to this pressure he got ill and died early. He was buried in Dar al-Imarah.

A war named battle of camel fought between Hazrat Ali ( the cousin and son in law of our Holy Prophet Hazrat Muhammad) and Hazrat Ayesha (widow of Hazrat Muhmmad). This battle is also known as battle of Jamel or battle of Basra. Talhah and Zubayr led the campaign targeting to revenge for the killing of Hazrat Usman (third caliph). The battle ended with the victory of Hazrat Ali on 10 Jammad ul Thani.

The death of Umm al-Banin (RA) Fatimah Bint Huzam Al- Kulabiyah happened in this Islamic month. She is also known as Umm al-Banin which means the Mother of sons. She was married to Hazrat Ali ( the cousin and son in law of our Holy Prophet Hazrat Muhammad) . She belonged to the branch of tribe Qais Ailan which is Banu Kilab Kalbasi, Khases Al-Abbasiah.

Hazrat Fatimah Zahra was born in Mecca and she was the daughter of our Holy Prophet Hazrat Muhmmad (PBUH) and Hazrat Khadija (First wife of Hazrat Muhmmad). She was born two or five years after the first Quranic revelations and at the time of birth, her mother Hazrat Khadija was over fifty years old.

Hazrat Abu Bakr siddique (RA) was the companion and father in law of our Holy Prophet Hazrat Muhammad (PBUH) due to his beloved daughter Hazrat Aisha. His full name was Abu Bakr Abdullah ibn Uthman Abi Quhafa. He was also the first Caliph. He died on 22 Jammad ul Thani in Madina at the age of 60. Abu Bakr fell ill and he wasn't able to recover from his sickness. He developed very high fever. He soon realised that his time of death is not very far. He requested Hazrat Ali to perform his ghusl after death as he performed it for Hazrat Muhammad. He also comprehend that he should nominate his successor before his death so that it will not become any cause of distress among the Muslims. He appointed Hazrat Umer for this task and many people disagreed from this decision as they wanted Ali ibn Abu Talib for this role. His last words were,

"In the name of Most Merciful God. This is the last will and testament of Abu Bakr bin Abu Quhafa, when he is in the last hour of the world, and the first of the next; an hour in which the infidel must believe, the wicked be convinced of their evil ways, I nominate Umar bin al Khattab as my successor. Therefore, hear to him and obey him. If he acts right, confirm his actions. My intentions are good, but I cannot see the future results. However, those who do ill shall render themselves liable to severe account hereafter. Fare you well. May you be ever attended by the Divine favor of blessing"

He was buried besides Hazrat Muhammad's grave.

Jammad ul Thani is among the blessed Islamic months. There are no special acts recommended for this month. Being a Muslim, there are no boundaries or specific time for doing good deeds. We should offer prayers, remember Allah Almighty and beseech Astaghfar for our wrong doings in the whole year. We must follow the instructions of our Holy Prophet. We should tell our children about these Islamic months, their incidents, Islamic history so that they can learn from it. May Allah shower his blessings upon all of us. Ameen!