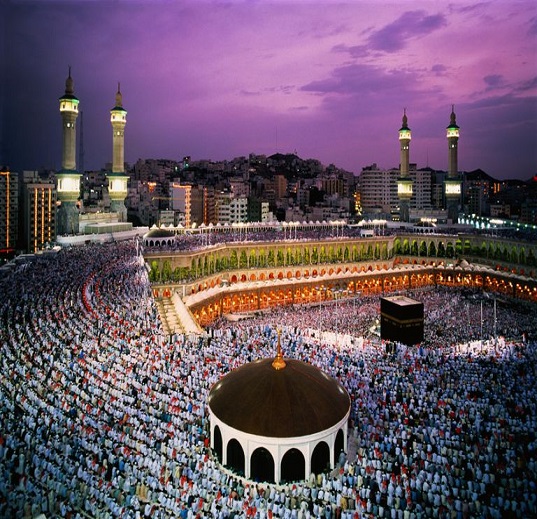 Hajj "pilgrimage" is the fifth pilar of Islam and is performed by Muslims in Makkah which is the holiest city for Muslims. It is mandatory for all adult Muslims who are physically and financially capable of this journey and can also support their family in their absence must perform Hajj atleast once in their life. Hajj demonstrate the solidarity and submission of Muslims to Allah Almighty. The meaning of word Hajj is "to attend a journey", this connotes both the outward journey and the inward intensions of a Muslim. Allah said in Quran,

And [mention] when We made the House a place of return for the people and [a place of] security. And take, [O believers], from the standing place of Abraham a place of prayer. And We charged Abraham and Ishmael, [saying], "Purify My House for those who perform Tawaf and those who are staying [there] for worship and those who bow and prostrate [in prayer]."

According to the traditions of Islam, our Holy Prophet Muhammad (PBUH) performed first Hajj in city of Makkah in AD 628, with 1,400 followers. On this beautiful occasion, which in also known as Farewell Pilgrimage in Islam, Muslims followed the footsteps of Hazrat Ibrahim (RA).

In other times of the year, Muslims also perform Umrah in Makkah which is called "lesser pilgrimage". This is not a substitute for Hajj, it is compulsory for Muslims to perform Hajj atleast once in their lifetime. Umrah is performed to achieve rewards from Allah Almighty.

Following are the main steps of Hajj,

Wearing the Ehram which is the standard clothing for Muslims when they arrive in Makkah.

They perform tawaf and Sa'ee in Majid al Haram.

They stay and offer their prayers in Mina

Revisiting Mina and stoning the Jamaraat.

Performing the sunnah of Ibrahim (Qurbani)

These steps are explained in term of days below,

On the first day, Hajj begins with the sanctuary of the Grand Mosque in Makkah. Pilgrims perform the first Tawaf and circle Kabah seven times in anti clockwise direction. Then they walk between the hills of Safa and Marwa seven times just like the wife of Hazrat Ibrahim, Hazrat Hajra did (in search of water for Hazrat Ismael). They also drink Zamzam water from the sacred well. This water is distributed by the official and is available in the taps around Makkah. Then they stay in Mina and offer their prayers. At this place, Hazrat Ibrahim sacrificed animal to Allah. According to the verses of Quran,

Indeed, as-Safa and al-Marwah are among the symbols of Allah. So whoever makes Hajj to the House or performs 'umrah - there is no blame upon him for walking between them. And whoever volunteers good - then indeed, Allah is appreciative and Knowing.

The day two begins with the Pilgrims heading towards Arfat which is a large field on the outskirts of Mecca, in order to attend the Hajj Sermon. This sermon is given in honour of Hazrat Muhmmad (PBUH) who gave Hajj sermon during his Hajj. From here, after the sunset, they move towards Muzdalifah where they spend their night in offering prayers and taking rest. They also collect pebbles for the ritual of the next day.

On the last day of Hajj, Pilgrims return to Mina and perform a ritual of throwing seven stones on three pilars. This day coincide with the day when Hazrat Ibrahim performed the sacrifice of his son to Allah Almighty. The three pilars signifies devil tried to dissuade Abraham from the sacrifice three times. Throwing stones on them represent stoning of devil as Hazrat Ibrahim used seven stones to destroy him. ( Seven is also considered a Holy number in Islam).

Than Pilgrims celebrate Eid ul Adha and perform Qurbani. Muslims celebrate Eid ul Adha as a reminder of our beloved Prophet Ibrahim (AS) dedication and devotions to serving Allah obediently, this is the true Islam of oneself that Allah expects from us. Performing Qurbani is mandatory for every pilgrim although they prefer to pay the necessary amount to the slaughterhouse in Makkah where the meat of the Qurbani is donated as charity to the poor and the needy people.

After celebrating Eid ul Adha, Pilgrims must pelt the Pilars once a day for the next two or three days so they return to Mina and stay in Makkah. During the last day of Hajj, pilgrims perform the final Tawaf around Kabah and also walk seven times between the hills of Safa and Marwa.

Things that are essential during Hajj are listed below,

1. Remove any hairs from the body or head and cut their nails.

2. Wearing any type of tight clothes that shows the details of the body or parts is forbidden. (for men).

3. Having sexual intercourse or performing related physical acts like getting married etc is prohibited during Hajj.

4. Killing of animals and insects or even hunting is not allowed. Except the trees inside the borderline of Great Mosque in Makkah, cutting of trees is allowed.

5. Use of perfume or any fragrance in prohibited

6. Covering the head with some cloth or hat (for men).

7. Wearing burqa and niqab that covers the face is suggested for women.